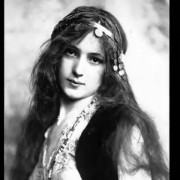 Don’t know where to start with her. She was a super, SUPER model in the early 20th century….she was a cultural celebrity, her picture on magazine covers, newspapers, souvenirs, calendars, you name it. The  scandal involving the man who plucked her from a chorus line(Stanford White, who built Madison Square Garden) and her future husband(Pittsburg millionaire Harry k. Thaw) was billed as the crime of the century, and it was only 1906 . The story is chronicled in a great book, “American Eve” if you get the chance to read it. There is a picture of the cover above.

Two movies that I know of were made involving the scandal and her life: “The Girl in the Red Velvet Swing” from 1955 and “Ragtime” from 1981.

She died in a nursing home in 1967 and was buried in Holy Cross Cemetery in Culver City, California.