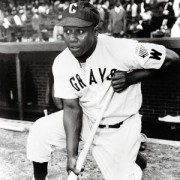 An American who played the position of catcher in baseball’s Negro Leagues. Baseball historians consider Gibson to be among the very best catchers and power hitters of any league, including the Major Leagues. Elected to the Baseball hall of Fame in 1972, he was known as the “Black Babe Ruth”. Some fans even called Babe Ruth the “White Josh Gibson”.  Unbelievably, because of an unwritten  “gentleman’s agreement” policy that prevented non-white players from playing, he never got to play in the major leagues. . The Baseball Hall of fame maintains he hit “almost 800” home runs in his 17 year career, and his lifetime batting avg. is estimated between .350 and .384. Statistical achievements may never be completely accurate because the Negro Leagues did not compile complete statistics or game summaries. Basically he was one of the greatest ball players ever, but doesn’t (but he should) get much credit.

He  died at the age of 35 and is buried in the Allegheny Cemetery in Pittsburg, PA