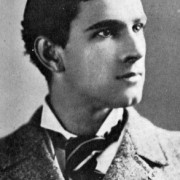 Maurice Barrymore(Born Herbert Arthur Chamberlayne Blythe) was the patriarch of an American Acting Dynasty. He was a great stage actor in the late 19th century, and married Georgina Drew, a member of another great acting dynasty, the  Drew Family. His children were famous actors in their own right:

All three are in the American Theatre Hall of Fame. Ethyl and Lionel both won Academy Awards, but John Might arguably be the most remembered for the life he lead.

John’s son, John Drew Barrymore, was an actor, but not nearly as famous as the generation before him.

I’ll bet you know his famous daughter, whose name came from two of the most famous acting families of the 19th century-

Maurice is buried in at Mount Vernon Cemetery, Philadelphia, PA.