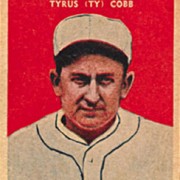 “The Georgia Peach” was an American Major League Baseball player. He is widely credited with setting 90 records in his Major League career. Mind boggling ! One that may never be broken, is a .367 (or .366 depending on source) lifetime batting average. Unbelievable that anyone could hit over .300 for 23 straight seasons. His reputation has been tarnished with allegations of violence and racism, and even the kindest description, in my opinion, would be that he was one rough ol’ boy. Not a guy to pick a fight with, but no one can argue with, however he played the game, that he is arguably the greatest Player ever. There is a great book by Al Stump about him this has a lot of info.It’s called “Cobb” and was made into a film starring Tommy Lee Jones.

He is buried in Royston, Georgia at Rose Hill Cemetery. Only three Baseball players attended his funeral.

Trivia:  A shrewd business man, Cobb’s estimated net worth at the time of his death was  about 11.8 million dollars. That’s 93 million in todays dollars, folks.