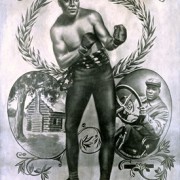 First African American to hold the heavyweight championship title. For the time, this is an incredible feat. Read about how he was treated by racists, accused of crimes, unbelievable that he could concentrate on boxing. There  is a really good movie about him starring James Earl Jones called “The Great White Hope”. There is also a really in depth documentary that PBS shows occasionally about his life. Born in Galveston, Texas, but buried in Graceland Cemetery, Chicago, Illinois.

Robert Fitzsimmons,  ANOTHER  heavyweight champion, is buried in the same cemetery.