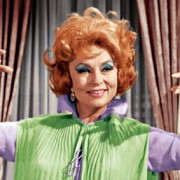 American character actress. One of the original Mercury Theater Players, she was Margo Lane to Orson Welles’ Lamont Cranston, A.K.A  “The Shadow”. She was in many movies as well as a performer on radio throughout her career. Her best known role might be “Endora”, Samantha’s mother, on Bewitched.  She Had one Prime Time Emmy Award and two Golden Globe Awards  to go with her four Academy Award and six Emmy Nominations. She died of cancer in 1974, and was one of the 46 members of the company of actors and crew of the production of “The Conqueror” (John Wayne and Susan Hayward among them) that were exposed radiation from nuclear testing in the desert.

She is buried in the Mausoleum at Dayton Memorial Park, in Dayton, Ohio.