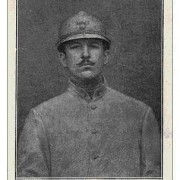 One of the Lost Poets of the Great War(WW l), Alan Seeger volunteered and fought for the French and was killed before the United States entered the war. He fought simply because he thought it was the right thing to do.His poem “Rendezvous” is one of my favorite poems. His other ones are good too, but this one is incredible.

His nephew is Folk Singer Pete Seeger, a legend in his own right.

For a while during the war, his grave was unknown, but in the Twenties it was discovered that he is buried at No. 1 Ossuaire, Lihons, France .

The other “Lost” Poets: