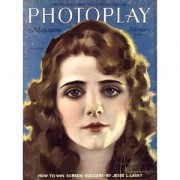 Olive started out as an illustrator’s model, then became a Ziegfeld Girl. In 1916 she made the first of over twenty movies in a four year career. She was married to actor/director Jack Pickford, the younger brother of super famous Mary Pickford. She died at age 25 from drinking mercury bichloride by mistake that had been prescribed to husband Jack.(It was topically applied to treat sores from syphilis ). The label being in French might have caused some confusion also.

Some claimed it was suicide, but evidence points to a horrible mistake.  Her death was considered one of the first major scandals in Hollywood, because at the time, rumors ran rampant about how she died. She was a legendary beauty in Hollywood, even Alberto Vargas immortalized her in one of his pin-up paintings.

She is buried at the Woodlawn Cemetery in the Bronx, NY

Miles Davis  and Bat Masterson are buried there too……lots of other famous people there if you get the chance to look it up.