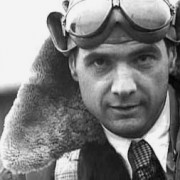 A brilliant  business magnate, a pioneer aviator, film producer, philanthropist, he was one of the richest men in the world. A lot of people remember him for the image that was projected of him at the end of his life, but he set speed records, made movies, and built a fortune so big even he couldn’t control it at the end. His net worth when he died was about 1.5 billion , and that is 6.5 billion in todays dollars. “The Aviator” is a great movie with Leonardo Di Caprio that explores his life. Just my opinion, but until the plane crash that nearly killed him, I think he had about the same neurosis’s and OCD’s as the rest of us, maybe a little more intense.  After the crash began the spiral.

This is how ahead of his time he was_ I saw a video of him of you tube, and it was a slow motion clip of his golf swing  he had done so he could study what he was doing wrong. That was the forties, folks, before television, before video, before instant replays, and waaaaaay before ESPN. I’ll bet people thought he was crazy.

“The Outlaw” was movie that Hughes produced in 1943, and the notoriety of the film is basically Hughes’ obsession with Jane Russell’s Boobs. There is an argument for that obsession tho, LOL. He even helped design her special bra’s to accentuate her, uh, assets. In her autobiography, Russell said she secretly discarded it , and wore her own. He had so many problems with the Hollywood Production Code Administration,  the film wasn’t released until 1946.

He is buried in Glenwood Cemetery, Houston, Texas

Actress Gene Tierney is buried there too….her post will be up soon.