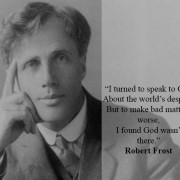 An American poet and writer, Frost’s work  will make you think. His realistic depictions of life and deep thought , added to his command of the English language are irresistible, to me anyway. Talk about a life plagued with tragedy- His Father died when Frost was 11, His mother when he was about 25, He outlived his wife by 25 years, and only two of his six children outlived him.  Some of his best:

The Road Not Taken

Stopping By the Woods on a Snowy evening

Nothing Gold Can Stay  (My favorite of his)

He is buried in  Old Bennington Cemetery in Bennington, Vermont.

He read a poem at JFK’s inauguration in January, 1961