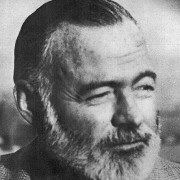 Ernest Hemingway was an American author and journalist. His books are considered classics, a lot written about his own experiences, but if you look at his life, why wouldn’t you write about it. He did a lot more than you and I will ever do, thats for sure…….. His granddaughters are Margaux and Mariel Hemingway achieved fame, Mariel as an actress, Margaux as a model and actress.

He committed suicide in 1961, and is buried in Ketchum Cemetery, Ketchum, Idaho

Granddaughter Margaux committed suicide one day shy of 35 years to the day after her famous Grandfather, and is buried close to him.