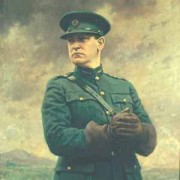 “Mick” Collins was an Irish Revolutionary, He is  a major, major figure in Irish History. He took part in the Easter Uprising of 1916, was Minister for Home Affairs in 1918, and for Finance from 1918 to 1922.

He was also Commander in Chief of the Irish Government forces during the Irish Civil War. Collins was murdered in an ambush in County Cork, and with all of the treachery going on, no one is sure exactly who ordered his death. There is a really good movie starring Liam Neeson about Michael Collins, if you get a chance to watch.

He is buried in Glasnevin Cemetery, Dublin, Ireland.

Kevin Barry, another Irish freedom fighter, is buried close to Collins. He was hanged in Dublin with others when he was only 18 years old. There is a pub in Savannah, Ga. named for him, and if you get the chance to go there, it’s like a little piece of Ireland…….