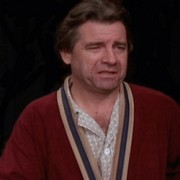 An american character actor, Trey Wilson was gone way too soon. Incredible in Raising Arizona as Nathan Arizona, He should have won an Oscar for that role.  A veteran of 30 films, He was awesome in Great Balls of Fire as Sam Phillips. He was only 40 when he died of a cerebral hemorrhage in 1989.

He is buried in Forest Park Cemetery , Houston, Texas.