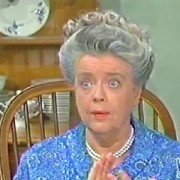 An American stage and television actress, she was originally from New York Theater, starting out in Vaudeville, then moved to Broadway. She received an Emmy in 1967 for her work on The Andy Griffith Show, and logged more years on that series than any other actor. According to several accounts, she was the opposite of her character, Aunt Bee, feeling like her talents were being wasted. I choose to believe that Aunt Bee had to be in her somewhere for her to such a great job with that role.

She is buried in Silar City, NC, at The Oakwood Cemetery.

Maybe it’s me, but I often noticed during The Andy Griffith Show, that she didn’t rally use an accent from the south……. see if you notice!