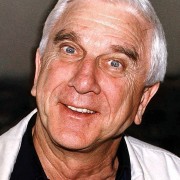 You remember him as a brilliant comedic actor, but Canadian born Leslie Nielson was in over 100 films and  150 Television programs in his career, many of them dramatic roles. “Forbidden Planet” and “The Poseidon Adventure” were two great roles for their time. He is forever Frank Drebin, but the  serious roles are there all though his career, and if  comedy is really as hard as they say, He made it look easy.  We should all appreciate his work- He was one of a kind.

He is buried at Evergreen Cemetery in Ft. Lauderdale, Florida.

As one final bit of  humor, he chose “Let ‘er rip” to be on his tombstone……. Ya gotta love a guy that is after laughs till the very end.