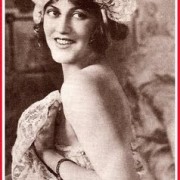 Lillian was an entertainer, considered one of the greatest beauties of the Broadway Stage before WW 1. Known as one of the most popular “Ziegfeld Girls”, it didn’t hurt that she became Florenz Ziegfeld’s mistress and the resulting affair broke up his marriage. A fixture for 3 or 4 years in the “Ziegfeld Follies”, her personal life was scandalous. Drinking, blackmail, affairs, a shadowy connection to the mob(reportedly to Arnold Rothstein, the man that fixed the 1919 World series, called the Black Sox Scandal), helped her burn out but she still found time to act in 10 silent films.

Her life should be a movie!

Originally buried in a pauper’s grave in the Calvary Cemetrery(Queens),She is now buried in Saint Raymonds Cemetery in the Bronx, NY. Singer Billie Holiday is buried in the same cemetery , as well as singer Frankie Lymon, and actress Lois Nettleton.