Blog - Latest News
You are here: Home / Other / Wyatt Earp 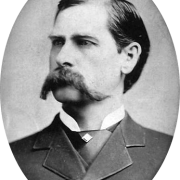 Wyatt Berry Stapp Earp was an American legend. Much of the story is steeped in shadows, and a lot not true. There was a gunfight on 10/26/1881, 3 men were killed, Virgil, Morgan, and Doc Holiday were all wounded in varying degrees. The whole fight lasted about 30 seconds. So many stories have been created about him that the truth is hard to find, and it is a lot grayer than any movie you have seen about him. Still, fascination for his life just seems to get stronger (for me too!).

There is a great book about him called “Wyatt Earp- The Man Behind the Legend” by Casey Tefertiller, to me the definitive book on Wyatt and his brothers if you want to get closer to the truth.

He is buried at the Hills of Eternity Memorial Park, Colma, California.