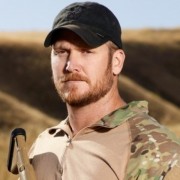 Christopher Scott Kyle was a United States Navy Seal and the most lethal sniper in the history of the U.S. Military with 160 confirmed kills, and another 95 “probable” kills. His autobiography, “American Sniper” was made into an incredibly powerful movie starring Bradley Cooper. After four tours of duty, being shot twice, and surviving six separate IED explosions, he was killed by a Marine Corps Veteran with PTSD that he and a friend were trying to help.

He is buried at the Texas State Cemetery in Austin, Texas

Reportedly his most successful shot came in 2008 when he killed an insurgent from 2100 yards(That’s 1.2 miles, folks)

Chang and Eng
Scroll to top