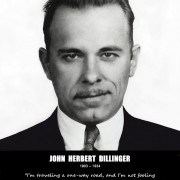 John Herbert Dillinger was the most notorious gangster of the depression era. Decades after the era, the first major book about the era was titled “The Dillinger Days”. He robbed 24 banks and 4 police stations( for the weapons). His crime spree lasted about a year and covered four states and he escaped from jail twice. He was only charged with, but never convicted of, one murder, and that was after he had returned fire when an East Chicago, Indiana, policeman shot him while he wearing a bullet proof vest. Don’t misunderstand, he was one of the bad guys, but evidently he had charisma during his short life , and his legend continues to grow 80 years later. Melvin Purvis led the hunt and ended his life at the Biograph Theater in 1934, even though J. Edgar Hoover, as always, tried to hog the credit. He is buried at in Crown Hill Cemetery in Indianapolis, Indiana.