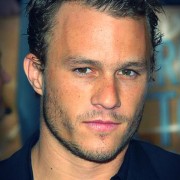 Heath Andrew Ledger was an Australian actor and director. Incredibly gifted, he was a star at 20, and gone by age 28. His roles in The Patriot, Monsters Ball, Brokeback Mountain, to name a few, are priceless. His performance in The Lords of Dogtown is also so good sometimes you forget it’s him.

Then there is The Dark Night. Unforgettable , scary, tragic, unreal. He won the Academy Award for Best Supporting Actor posthumously for this role. What he might of done is something to ponder, but I guess we should appreciate how brightly his star burned while he was here. He was cremated and his ashes scattered at the site of his Grandparent’s grave in Perth, Australia, at the Karrakatta Cemetery and Crematorium.

Most of his acclaimed performances were done with an American accent, further proof of his talent.