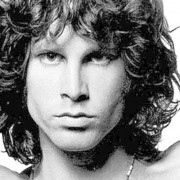 James Douglas Morrison, the Lizard King, was an American singer, poet, andsongwriter best remembered as the lead vocalist for The Doors. An enigmatic performer with a genius IQ, he was as unpredictable as they come. After reading about Arthur Rimbaud’s life , he sometimes said he was going to drop out and disappear, and then if he wanted to contact anyone, he would use the code name “Mr. Mojo Risin”, an anagram for “Jim Morrison”. After he died at the age of 27, the rumors flew(and still do) that he was still alive, and since no one ever saw his body, everybody waited…….. Over 40 years later we are still waiting for Mr. Mojo Risin. I don’t think he is coming back, but his legend keeps growing. There is a good book called “No One Here Gets Out Alive”,(based on a lyric of his) by Danny Sugerman and Jerry Hopkins that is a great read about his life.

He is buried in the Cimetiere du Pere Lachaise in Paris France.

This cemetery has over 1 million permanent residents……… !